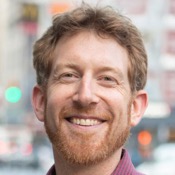 Welcome to New York City! My name is Jonathan and I'd love to show you my NYC!

I have deep generational roots in New York City, mirroring the classic immigrant experience from Ellis Island to the Jewish Lower East Side. This background has inspired an ongoing quest for the best of the city past and present, from the suspension cables of the Brooklyn Bridge to the hot pastrami at Katz's deli. I moved from the depths of Jersey to Manhattan's Morningside Heights at age 18 for college.

I studied American and ancient Roman History at Columbia University under Kenneth Jackson, one of the all-time great historians of New York City. After college I worked for a few years in finance by Wall Street and in Midtown before heading back to school in Israel, where I earned an MA in Archeology from Bar Ilan University and got my start in tourism.

I currently guide tours in New York City. I love tracing the city's history, from the footprints of George Washington to those of Malcolm X, and exploring hidden gems from pizza slices to jazz clubs. I see New York City as an endless playground of culture, history, and energy where every day seems to yield a new adventure.

I would love to show you my favorite things about the greatest city in the world!

Jonathan was with our team in NY during a documentary filming about animals and he was fun, professional and interesting, just what we needed for the story!
Marija Coso