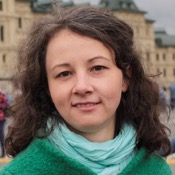 I started my guide career at the age of eight, leading some other girls to an underground tunnel nearby.

I was already seen as something of an explorer, because I had just come back from the States (a pretty rare thing in those days), full of stories about things like Gorby and Bush toys in bed together under a Soviet-American flag or a press-conference which was held for us as the first Russians ever seen in Greensboro, North Carolina. Now it was the early 90s, when life in Russia turned upside down after an outright conversion from socialism to capitalism. (Oh yes, we did get out of that tunnel safe and sound!)

Later at college I took some friends hitch-hiking to see the stark beauty of Russian tundra and the rocky coasts of the Black Sea. And for graduation I treated myself to a trip to the most remote part of Russia - an otherworldly mysterious place where the great Siberian river Lena meets the Arctic Ocean. Back in Moscow and teaching Russian to expats, I found my students repeatedly asking me for guided tours around this huge puzzling city. With time and experience, as my students started bringing in their visiting friends for my guided tours I realized this is something I wanted to do full-time and started my own company. In addition to some classical routes I have been designing my own tours like Cycling Tour, Architecture and Literature, Hidden Area of Moscow.

And who knows, maybe you and I will find some new places together - Moscow is full of surprises!

My wife and I took Maria's 3-day private Moscow tour in Sept, the tour was highly enjoyable, interesting, and educational. Maria's knowledge of Russian history and literature was second to none, and she was able to skillfully make history come alive as we were walking through interesting historical sites. She was also flexible enough to make adjustments to the set schedule to take us to the sights we were especially interested in seeing. We highly recommend to take Maria's tours.
James P.