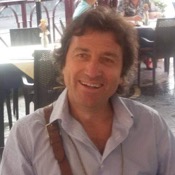 My name is Dario and I'm from Sorrento, in the bay of Naples.

I have a University Degree in Foreign Languages specializing in History ("Orientale" University of Naples) and a second University Degree in Archeology ("Luigi Vanvitelli" University of Santa Maria Capua Vetere).
I've been a licensed guide of the Campania Region since 1996.
I've been working as archaeological guide for 25 years in Pompeii, Herculaneum, Oplontis, Archaeological Museum of Naples, etc.
I'm an expert in Roman archaeology and History, and for those of you who look for something "special", tailor-made, it will be a pleasure for me to arrange a specific tour for you.
As an archaeologist, the archaeological excavation I'm proud of is the one carried out in 2017 in Cumae, which is the "cradle" of Western culture. The Greeks emigrated from their homeland in Southern Italy and founded Cumae as their first settlement. From there the Greeks transmitted their alphabet to the Romans who, by Romanizing it, transmitted the same alphabet to the populations that were gradually conquering in the world. So, if today the whole Western world uses the same alphabet it is thanks to Cumae from which everything started.
This magical place is where I used my trowel with great emotion.
In addition, together with engineers and scholars of other disciplines, I have conducted scientific research on different topics such as the Roman aqueduct in Pompeii, the fresco technique, the Roman construction techniques and other studies of this kind.
WHY A REAL ARCHAEOLOGIST FOR YOUR PRIVATE ARCHAEOLOGICAL TOUR TO HERCULANEUM AND POMPEII ?
The Roman ruins of Pompeii, Herculaneum, Stabiae and Oplontis are in an extraordinary state of preservation and deserve a visit worthy of their value. In the company of a real archaeologist, you will be able to appreciate the most evocative places of these mysterious Roman towns. What was the urban planning, the interiors of the houses, the daily life with all the furnishings, the objects in common use: in other words, what constituted the essence of a Roman city, and it can only be found in magic places like Pompeii and in Herculaneum.
Ciao

Our second excellent tour with Dario - we loved his extensive knowledge, his enthusiasm, and the way he made both Pompeii and Herculaneum come alive for us. He is so warm, friendly and generous, and passionate about his country and his special corner of it. We felt we were with a friend who was showing us something very special to him. And we loved that he seemed not to worry about time - Dario gave us far more than we ever expected. He is a wonderful guide.
Judy Sheehan