Where to Eat in Lisbon 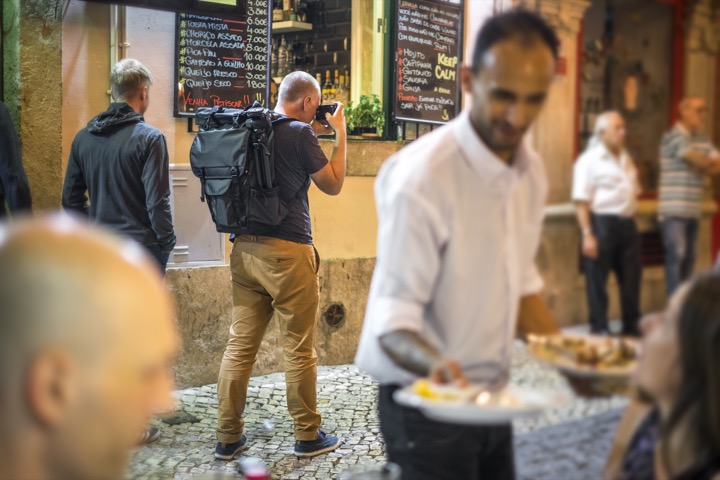 View Gallery (6)
One of the most common questions travellers ask themselves – either months in advance, or perhaps only hours - is: where are we going to eat? When traveling to a city with a proud history of fresh, local cuisine, choosing the right restaurants to eat at is an integral part of the experience. But who do you rely on to find the best, most up-to-date restaurant information? A local guide of course! Especially a local guide who loves food and food culture. Joining us today to share the best restaurants to eat at in each of Lisbon’s major neighbourhoods, is Lisbon guide Luis.

Going out to eat in Lisbon is no longer the bargain of old days. Those 5-euro lunchtime dishes are now a thing of the past. Still, compared to other European destinations, Lisbon continues to make it easy on the pocket.

Let’s look at some of the most famous districts, and the best places to eat in each.

Where to eat in Chiado

Chiado is the charming heart of the historic centre. In general, restaurants in the area have more pretensions (and therefore higher prices) than those of neighbouring Bairro Alto and Baixa.
José Avillez is the most successful chef in Portugal at the moment. His showcase restaurant is Belcanto (Largo de São Carlos, 10, Chiado, tel. +351 213-420-607), awarded with two Michelin stars but the chef has another dozen restaurants split between Lisbon and Porto and accessible to less stuffed wallets. 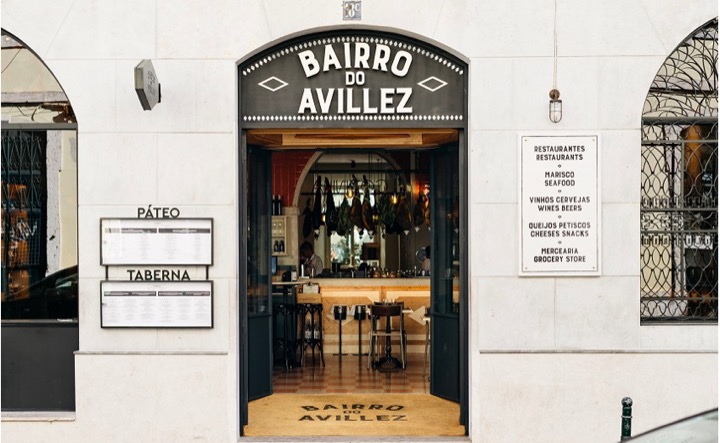 The Bairro do Avillez is one of its most democratic addresses. The space has four distinct environments - the Taberna, which serves snacks; the Portuguese Pateo with a strong emphasis on seafood; the Cantina Peruana, with Peruvian cuisine, and the Beco Cabaret Gourmet, where dinner is accompanied by a burlesque show. In Páteo, if on the menu, try the razor clam. The codfish A Brás comes with 'explosive olives', and the seafood rice is 'malandro' (wet, with tomatoes). You’ll need a reservation. (Rua Nova da Trindade, 18, tel. +351 215-830-290)

Where to eat in Bairro Alto 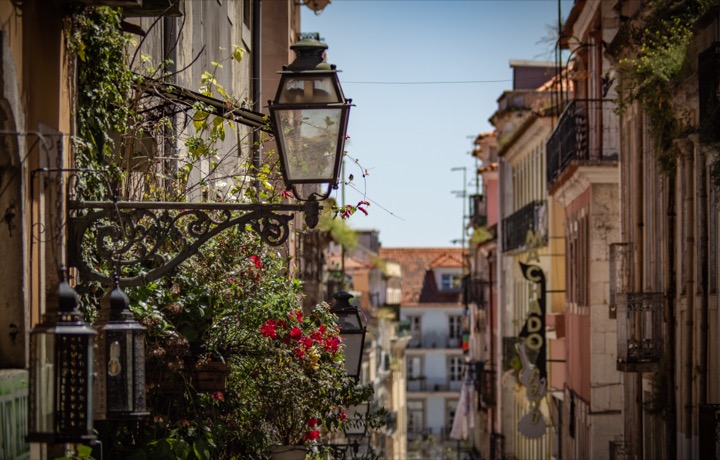 Bairro Alto, which is adjacent to Chiado, is rather alternative and is probably the best part of the city to find good ‘Fado’ restaurants (where you can listen to traditional Fado music). The streets are full of graffiti and laundry hanging outdoors. It is an important part of Lisbon’s nightlife, attracting a hipster vibe, mostly on weekends.

The Cantinho do Bem Estar (“Little Corner of the Well-Being”, in English) is a legitimate Alentejo (Portuguese rural region south of Lisbon) tavern which always has a line at the door. Try codfish, roosterfish with bean rice (Portuguese baião), or veal in coriander sauce. Note: it does not accept cards, only cash. (Rua do Norte, 46, tel. +351 213-464-265)

Where to eat in Cais do Sodré 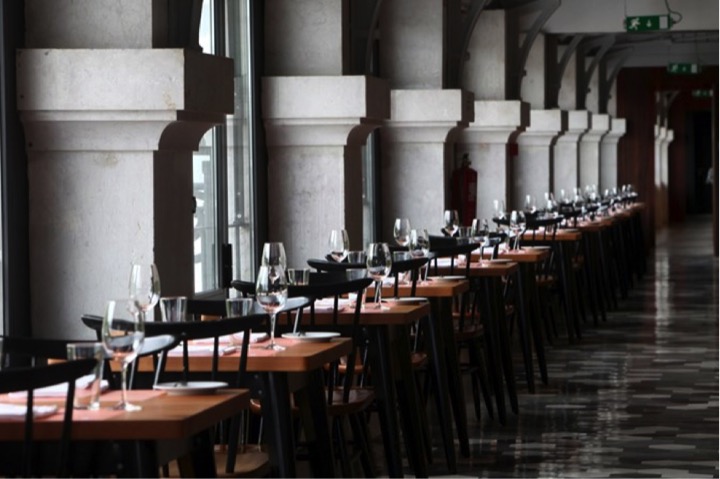 At first (and second, and third) sight Cais do Sodré is for drinking rather than eating. Hidden off the drunk corridor on Rua de Rosa, however, there are restaurants full of “coolness”. Cais do Sodré also holds one of the only two gastronomic addresses in Lisbon (the other is the Pasteis de Belém Pastelaria or Patisserie in French) with tourist attraction status: the Mercado da Ribeira / Time Out Market.

An icon of the good times of Bairro Alto (during the 80's and 90's), Pap'Açôrda moved to Mercado da Ribeira in 2016. Its menu is still cast, with dishes ranging from cod a lagareiro to goat rice. The delicacy that gives its name to the restaurant is the garas de azarada - a very thick (nearly solid!) Alentejo soup of bread and shrimp. Do not miss the unavoidable (so it is said in Portugal) chocolate mousse, which has been passed around the room for 30 years in a large silver bowl and is served in soup spoons put on the table at the end of each meal. (Mercado da Ribeira, av. 24 de Julho, s / n, tel. +351 213-464-811)

Where to eat in Príncipe Real

Hovering just above Bairro Alto, the Principe Real neighbourhood has blue blood in its DNA. Opening here is the ultimate wish of any restaurant.

Henrique Sá Pessoa has a Michelin star in his main restaurant, Alma (Rua Anchieta, 15, tel. +351 213-470-650, online reservations). In Tapisco, however, takes his brand to the world of silverware. 'Tapisco' is a coined word that combines 'tapas' with 'petiscos'. The dishes have a sometimes Spanish flavour (pan con tomato, baccalaurea de bacalao), sometimes Portuguese (clams à Bulhao Pato, cod à Brás). Does not close between lunch and dinner - but at mealtimes those who do not reserve are subject to a long wait. (Rua D. Pedro V, 81, tel. +351 213-420-681, online reservations).

Where to eat in Martim Moniz and Intendente

A little bit off the tourist route, just behind Rossio and reaching out to the poorest slope of the Castle, this is the most gastronomically diverse region of the city. Many recent immigrants have settled here, opening a babel of exotic cuisine restaurants. There are also many traditional restaurants - the region is both edgy and popular. With the inevitable approach of the Lisbon real estate bubble, trendy restaurants are also starting to appear. 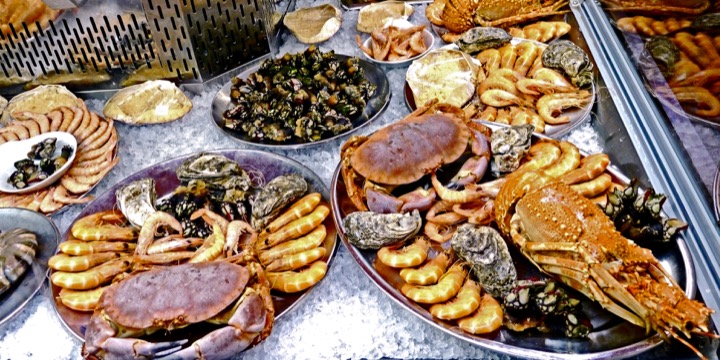 Ramiro is a classic. Half of Lisbon is lined up here to try the city's freshest seafood. Downstairs, it looks like a simple tavern; the second floor is tidier, with more space between tables. A few dishes have a fixed price, such as the bestseller, 'prawns à la Guilho' (a corruption of 'al ajillo'), which costs just 11.62 euros. Most delicacies, however, will be charged by weight - on my last visit I ordered giant prawns (tiger prawns), Bruxas (a bonsai crayfish) and shredded crab.

There are no fish (even less cod!), nor side dishes like rice or potatoes. So, don't refuse the butter-drizzled rolls, which are the closest to a loaf of bread you'll find in Portugal (the portion costs less than 3 euros). Depending on the wine, a pair will spend between 90 and 120 euros. It is open without interruption between lunch and dinner (but closes Monday) and does not accept reservations by phone. However - and here is a secret that few Lisboners even know - Ramiro accepts reservations by email geral@cervejariaramiro.pt. But book early: The answer usually comes in 2 or 3 days. (Avenida Almirante Reis, 1, tel. +351 218-851-024)

If you’re heading to Portugal and want to explore the city’s food scene with an experienced guide, check out Luis’ Foodie and Cultural Tour of Old Lisbon. Only prerequisite: bring your appetite!