Sipping Riesling and Drinking in the History of Alsace 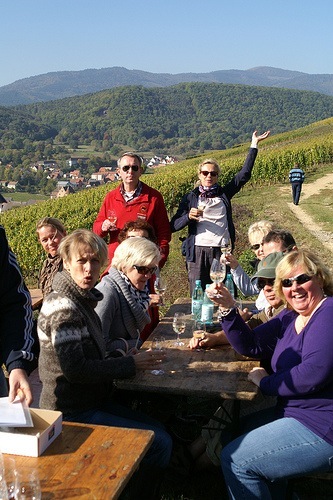 View Gallery (2)
Have you ever traveled through a wine region? The history of the vines, the long-established traditions that go into wine-making, the families who have spent generations perfecting their art; this all makes for a heady emotional experience when you sip the fruits of their labour. Our guide Pieter in Alsace joins us today to explain why you’ll fall in love with his part of France.

The Alsace Wine Route is 170 kilometers (about 106 miles) from Cleebourg in the north to Thann in the south. This route began in 1953 and takes visitors through the middle of the Alsace wine country’s vineyards and villages.

The history of wine making in Alsace goes back to old Roman times. Castles dot the landscape, while villages, churches, vineyards and wines, cuisine and traditions all make Alsace a unique and magical European experience.

The vineyards of Alsace are among the oldest of France. For over 20 centuries this region of France has produced wine. It began in Roman times with the legionnaires, also known as the Roman Legion: basically the ancient Roman army.

Today Alsace is a survivor of two world wars, bouncing between German and French rule, and a thriving community which is modern, yet has not lost any of the old world charm and culture. It is considered a border community, and the inhabitants usually speak French and German, while the local language is Alsatian. We are definitely in France, but you can see the German influence in the architecture, and also in the food. For example, choucroute garnie otherwise known as sauerkraut served with potatoes and various cuts of pork including sausage, bacon, and ham.

The tradition in Alsace is to make dry white wines and Pinot Noir for red. Oak casks are used some times for fermentation, also stone and stainless steel is used. The type of varieties grown, the plots of ground they are grown on: terroir, the direction in which the vines face (preferably south and south-east), the amount of rainfall and exposure to sunlight; all these factors affect the wine’s richness, complexity of aromas, sugar content, acidity and other properties . When you go on a wine tour with me you will see, and more importantly, taste it all!

Touring Alsace is a joy because so much of the history is preserved. One feels like they have traveled back in time, yet all is in good repair. Charming houses, shops, restaurants, and wine houses are in abundance, as well as an elegant countryside.

One will often see the white storks of Alsace, the birds we grew up with in our fairy tale books and were told delivered babies wrapped in blankets and left them on the door steps.

We find there is much about Alsace that is "storybook like", that is how to best describe this wonderful place; you've stepped back in time to a storybook land. A land of castles and magnificent churches, a land of stories of witches and princes and princesses, kings and queens, a land of gingerbread, bretzels, beer, and choucroute, Michelin-starred restaurants and arguably the best white wines on planet earth.

We’re sold! If you’re also ready to book your plane tickets to Alsace, consider getting in touch with Pieter to plan an incredible private tour of the wine region.