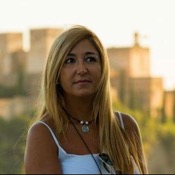 It will be a pleasure for me to show you the way to discover the Mystery, the Magic and the Beauty of Granada, my city…

I was born and raised in this city. My family belongs to Granada for many generations ago, where We were even able to investigate our ancestors and heritage as a family.
I'm an authentic "granadina" native which I consider very interesting in this job because I can mix my academic knowledge and my continuous recycling and improvement with all my personal experiences as well as those of my family.

Being native makes sense if I belong to this web calls "ToursByLocals" ;-)

I have two degrees at the University of Granada in Tourism and History, but to improve my languages I've been studying in different countries such as U. S. A, France or Austria, as well as being travelling the world meeting people from everywhere.

Always working at the tourism world, I have over 17 years of experience working as a travel agent in some of the most important travel agencies in Spain, and since some years ago as an Official licensed Tour Guide, being able to explain inside the Alhambra, Cathedral and the rest of the monument in Andalucía, by myself.

All my tours can be customised following your own ideas. Just let me know about you special wishes and I will get it. They all are private tours and I'm a very flexible person.

We can visit the Alhambra and the rest of Muslim monuments that we still have in the city, but we can also walk around the old Jewish quarter, or the Christian Granada visiting churches, monasteries and convents of the 16th century.

Taking "TAPAS" at the traditional bars in the old quarters, a "Shopping tour" downtown, get lost in the narrow streets of the Albaicin Neighbourhood or a "Flamenco Night Party", can be another way to discover my city. .

Someone said…
… "If we had to visit a single City in Spain, that should be Granada"… (Ernest Hemingway)

… "I remember the sound of water passing through the gardens of the Alhambra and the Patio de los Leones. It was the first time I realized that water was important…" (Naruhito, Prince of Japan. )

Granada is waiting for you and will surprise you. Come and discover it with me!!

This tour could not have been any better! What made it Excellent though was our guide Conchi. She was amazing due to her knowledge and ability to communicate with us in English. If you are going to Granada, having someone who was born and grew up there is essential in my opinion. Her local knowledge along with her incredible historical knowledge made for the perfect tour. She is very accommodating! If you have the opportunity to use her and don't, I believe you would have made a grave mistake...
Jerry Walker

I am a fully licensed guide for all the monuments being able to explain inside them such as Alhambra, Albaicin, Royal Chapelle, etc.
No restrictions.