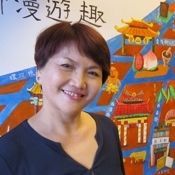 It is my pleasure to show you the beauty of Taiwan - as a licensed English guide appointed by the Tourism Bureau.

After my graduate study in Arizona in the USA, I've been regularly traveling the world on planes and cruise ships.
Living in the port city of Keelung, I'll take you out of the cruise and tourist bubble and beyond the guidebook, texts to experience nearby Taipei, the North Coast, and the real Taiwan.

You will be amazed by the rich history and geography of this green subtropical island; seen by you, me and usually along with my Dutch husband, a resident of Southeast Asia and Taiwan since 1992.

The Portuguese put the island on their maps as Ilha Formosa, "the beautiful island", because its lush tropical forests on the central mountain range are visible from the sea. Taiwan's first contact with the West came with the Dutch 'VOC' East India Company traders settling in Tainan in Southern Taiwan in 1624, followed by the Spanish in Tamsui and Keelung in the North in 1626. Traces of Dutch, Spanish, French, German, British, Canadian, American and half a century of colonial Japanese influence from 1895-1945 still exist. All mixed with local Taiwanese, Chinese and indigenous culture.

Roughly the size of Switzerland (or Delaware and Maryland combined), the mountainous and alpine island of Taiwan has the largest number and density of high mountains in the world: 160 of them are above 3000 meters. Located near the Tropic of Cancer, Jade mountain is the highest peak in East Asia, at 3952 meters (almost 13000 feet) and still rising by a centimeter or more a year due to seismic activity; Taiwan is located on the 'ring of fire'

Best months for a visit are April/May and October/November, outside the more muggy Summer months with the chance of a number of typhoons (literally our 'big winds', also named cyclones or hurricanes) and tropical storms when, for about a week at a time, bright days may contrast with heavy rain and powerful gusty winds. Expect rain in the North during fall and winter, in the South during spring and summer - brought by the trade winds.

Busy travel time on the island is during Chinese Lunar New Year in January or February, and during the national holidays on and around 1-10 October.

More than two-thirds of the island is covered by five forested mountain ranges and deep and steep valleys, leaving the Western side to be inhabited by 23 million people. No wonder greater Taipei with 8 million inhabitants has one of the highest population densities in the world. Yet, just North of the city you can easily relax in the hot springs of Yangmingshan National Park and marvel at the rocky coast of Yehliu Geopark. Or enjoy the tea plantations and panorama view of the city at Maokong, or see the coastline from a Jiufen tea house near Keelung.

I can make you feel at home in Taiwan, show you a local view of the culture, cuisine, and history in arranged customized trips, and tours guided in English. Together with Jan, my Dutch husband, who lived in Oregon in the US and various places around the world before settling in Taiwan. His support in basic German, French, Spanish or his native Dutch helps you to make the best of your and our time together.

Arriving on a cruise? Then you may choose one of the tours starting in Keelung, to see the coast, Taipei, and sample delicious food in our night market when your ship stays overnight. Please remember that all trips are private and can be customized - no other fellow travelers will join unless requested by you in advance.

You can check my availability by browsing any of my detailed and flexible published tours, which I'd be happy to customize for you.

Let me know how I can be your guide!
Taiwan will touch your heart. . .

We spent 2 days with Christine and saw places in Taiwan that most people do not go to. We have traveled all over and this was one of the best travel guides that we have ever had. You will never be disappointed with Christine.
Dennis R.

Driving and guiding must be kept separated on Taiwan's busy roads, so my trips are offered with a local agency and professional drivers.
Regular hours are from 9 to 5, at other times and for extra actual time surcharges may apply.