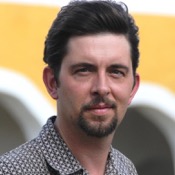 Very enjoyable 1:1 cycling introduction to Mexico City on an electric bike which was a new experience! Jonas combined historical info with modern architecture and an intro to mouth watering sweet tamale and coffee in a small cafe run by indigenous people. The cycling was a mix of cycle lanes and roads with some weaving around traffic so this is a trip for confident cyclists, which give a good feel for the city and its varied architecture. Thanks Jonas, definitely worth repeating!

TOUR GUIDE RESPONSE: Glad to have shared this intro to México City in an original way, thanks for your review!

Jonas is a much in-demand tour guide and I feel fortunate that we were able to book him for our bike tour of Mexico City. It was a wild, crazy day as we wove in and out of Mexico City's crazy traffic. Jonas was very interested to know of our interests so as to tailor the bike excursion to our tastes. This led to a very challenging but rewarding ride to Chapultepec Park and the Diego Rivera waterworks - a highlight of our ride. While we ended the ride pretty exhausted (with sore seats!), we saw a lot!

This was a great way to see Mexico City!!! We loved our guide-can't believe how much we saw and learned. Exciting bike ride through many of the main neighborhoods of Mexico City-the perfect way to spend a Sunday and a great introduction to Mexico City. Perfect activity to do with teens as well. Nice bikes. While there are many things I would attempt to do on my own, touring Mexico City for the first time on bike is better done with a guide. Good food stops. I highly recommend this tour!

We had an absolutely wonderful 4-hour bike tour with Jonas. His knowledge of Mexico City's architecture and history provided us with a fascinating new perspective of the city while enjoying great food stalls along the way. Despite being Belgian, Jonas' heart is truly Mexican and you can't help but share his enthusiasm for this incredible city. We were a bit intimidated taking a tour by bike, but as long as you have a good handle on riding, there is nothing to be afraid of - the drivers here were nice!

TOUR GUIDE RESPONSE: Thanks for your nice comments! It was quite a challenge to combine 12 miles of cycling, lots of info and lots of nice tastings into 4 hours, but glad we made it and you appreciated it! It sure made my Mexican heart bounce faster!

Gregory and I did 3 tours with Jonas - walking tour and biking tour of Mexico City and a cooking class. We enjoyed all three very much. Jonas was an excellent and knowledgeable guide, who listened to what we were interested in and tailored the tour on the spot. We saw many hidden, off-the-beaten path treasures we would never have known about; also great stories and background on what we saw. We definitely give Jonas V. 5 out of 5 stars.

Single female travelling - was very happy with this tour. Jonas was friendly, relaxed, helpful, extremely knowledgeable. Showed me some interesting off-the-beaten-path things. Lots of explanations given throughout the tour. Great sense of humour. 100% recommend

TOUR GUIDE RESPONSE: Thanks Laure, and keep on cycling!

We had a great afternoon exploring several Mexico City neighbourhoods with Jonas today by bicycle. While riding along, we stopped often so he could describe where we were and local points of interest. He is very knowledgeable about many aspects of Mexican life, culture and history, and clearly loves his adopted city. Thanks, Jonas, for a great time.

TOUR GUIDE RESPONSE: You were great cyclers, Leslie and Danica. Hope you'll have a great time continuing to explore Condesa and other neighbourhoods, and nice weather at the beach.

Jonas is an extremely knowledgeable guide who is clearly passionate about Mexico City and his work. Our tour was custom-tailored based on our interests. Overall, we had an excellent time and would highly recommend Jonas' bike tour to anybody interested in seeing a lot in a short period of time.

TOUR GUIDE RESPONSE: Hi Nima, it was my pleasure to discover the city through your city planner's eyes!

Jonas was knowledgeable, congenial and really flexible. We could not ask for a better guide. We would definitely recommend him to others and use him again if we are back in Mexico! He accomodated three teenagers who liked to eat a lot and can be squirrley. We had quite an adventure biking in the big city!

TOUR GUIDE RESPONSE: It was really a pleasure to give you a hint of Mexico City by bike and provide a last nice memory to your holidays. PS I hope Jed will have his students fascinated with its "genuine" Aztec souvenir;-)