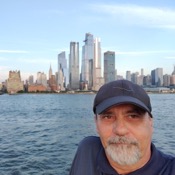 Francesco was a wealth of knowledge. My family and I learnt so much about New York and its Burroughs. We had such a wonderful time with our custom made tour. Thank you Francesco for showing us New York. We hope to return in the near future and meet up again for another tour. Grazi.

TOUR GUIDE RESPONSE: Lara thank you so much, it was a real pleasure taking you and your family around my city. I truly hope to meet you again. And thank you so much for the Tim Tam, it was such a sweet thought. Francesco

Francesco took us on a tour of places in New York that we wouldn't have seen on our own and gave us a sense of how people live outside of Manhattan. He really knows New York and was very personable. Would highly recommend him.

TOUR GUIDE RESPONSE: So kind of you Neal! I was very happy to show you a part of NYC rarely seen.