Tour: The Paris of a parisienne 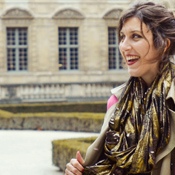 Alois was just a terrific guide; personable, attentive and knowledgable. We were two couples one of which had been to Paris a number of times. She managed to provide both couples with a tour that included some of the more famous sites in the city while also taking us to a number of quiet streets with really interesting shops, buildings and churches. Just a great day for both couples spent with one of the best guides we have ever had. We would highly recomend choosing Alois as your Paris guide. Ron

We had a great time with Alois. She really did take us to all these wonderful hidden places we would never have gotten to on our own. Not only does she know food and fashion in Paris, but she is also quite knowledgeable about culture and history. When we go back to Paris (and we will!), I would totally book Alois again.