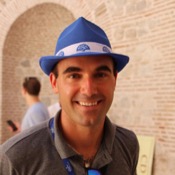 Hello, my name is Vjeran ("faithful" in Croatian) and it would be my pleasure to be your host in this part of Croatia where I live and which I'm in love with.

I am a private guide that offers private tours in Split and the surrounding area.

I have worked as a licensed tourist guide for the Split region for seven years, but I've been involved in tourism since I was 14 (I am 37 now).
After graduating from high school, with an emphasis on tourism, I obtained my undergraduate degree in tourism. I've been working at the Split tourist office ever since.

This region is, I daresay, one of the best there is when it comes to opportunities to see so many breathtaking places not far from each other. For example - the amazing palace built by the Roman emperor Diocletian, which has grown into the city of Split. Then, one of the most beautiful small towns in the world - Trogir. It is almost impossible to find a place of that size with so many monuments.
Just minutes away from Split you will find the key to our history and Christianity - the ruins of what was once the glorious Roman capital of the province, Salona. From there you literally see another wonder - the fortress of Klis - where so much blood was shed in order to stop a fierce enemy, the Turkish army, trying to put to an and Europe as it was then. Heroes were made then, and heroes are being made now, with the fourth and the fifth season of the globally popular TV-series "Game of Thrones" which has been filmed in this area.
There is so much more: natural wonders like Plitvice Lakes, The Krka Waterfalls and others. Islands like Hvar and Brač will capture your heart.

You have just one day… No problem! Only half a day… Still no problem! Not more than a couple of hours… My answer remains the same - No problem! Tailor-made tours are what I'm all about. And my tours are designed to meet your needs and wishes. You tell me what you would like, and I'll do my best to make it happen.

I do believe there are many people out there watching and loving "Game of Thrones". If you're one of them check out my tour - Split Game of Thrones tour.

Why would you pick me?
"There are no men like me. Only me. "
P. S. Don't get me wrong, I don't think too highly of myself. I'd just like to think I'm at least a bit unique.

Thank you Vjeran for an amazing tour of Trogir and the Diacletian Palace. We had a great time with you and your driver. Your knowledge of the area was incredible. We hope to return again, and would certainly look to do another tour with you! Your restaurant recommendation was "spot on", and loved every bite!
Dale Niehaus