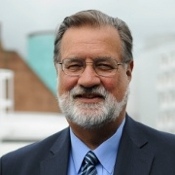 I started working life as a Civil Engineer, with a degree from Glasgow University, and worked in construction, travelling throughout Scotland and the rest of the United Kingdom.

For the last 15 years, I served at Director or Regional Managing Director level on Regional and UK Boards of major building and civil engineering companies.

On early retirement in 2004 I trained as a Blue Badge Guide, taking the 2 year course successfully at Edinburgh University. Since then I have travelled throughout the whole of the Scottish Mainland, and all the major Islands, generally as a Driver Guide. I have also spent 11 years as a Governor at Glasgow Caledonian University.

I thoroughly enjoy taking people round my country -its great to meet new people and share with them my own enthusiasm in exploring all the many and varied delights this country has to offer. And these delights can vary from exploring the subtleties of a single malt whisky to standing in the footsteps of Braveheart!

Hugh is knowledgeable about the history of the important historical places. He is friendly, courteous, and has a keen sense of humor. Highly recommend Hugh as a tour guide!
Maura Shapiro