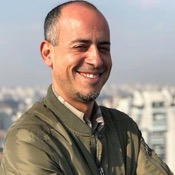 My name is Renato, journalist and tour guide born and raised in São Paulo city.

Graduated in Journalism with emphasis in Culture and Education, I worked as reporter for several radios, magazines and newspapers during my career. I think my connection with the city started to be strong in this period, when I wrote different articles about social problems, cultural events, new urban scenes and history facts of this massive metropolis.

I started to work with tourism in 2013, inspired by two big events: Soccer World Cup and the Olympic Games. In that moment, I already spoke other languages as English and Spanish. So I started to study to be a licensed tour guide.

My beginning as a tour guide started with a personal project that offers cycle tourism in São Paulo. The bike tours cross touristic areas as the historical center, Paulista Avenue and Ibirapuera Park and became a good option for those who love to cycle and explore the city on two wheels.

I have been working as a driver guide in São Paulo since 2014, and as a freelancer too. Most of the tours present the most important highlights of the city as the historical center, Vila Madalena and the Ibirapuera Park. Some other options are the tours literally around the city as the Beach Tour (Santos e Guarujá) or even Campos do Jordão or Embu das Artes, two touristic cities in the countryside.

But during the last two years my specialization became the Street Art, in my opinion the new trade mark of São Paulo. The idea of my tours is very simple, show the areas of the city painted by the most talented local urban artists. Some of these places are very hype and touristic as the Batman's Alley and the art galleries in Vila Madalena. Other areas are under viaducts, overpasses, abandoned buildings, not exactly pretty, but this is the way to understand the context of the authentic street art. Few months ago I had an opportunity to do a tour for a reporter from the NYT and this experience was part of his article called "36 Hours in São Paulo"

Just to finish, I have been working for different tour agencies specialized in Study Abroad Programs in Brazil for American universities. Since 2015, I had something about 26 groups from different states as Colorado, Massachusetts, Washington, Texas, Illinois and Arizona, for example. But the diversity extended to the different types of courses and disciplines as Business, Agriculture, Sustainable Energy , Environment, Architecture and Human Resources. All of them were great opportunities to improve my English vocabulary and my knowledge about my own country.

So, this is my experience as a tour guide. Will be a pleasure to introduce São Paulo city for you. Hope to see you soon.

Renato was an excellent guide - on time, very informative and adaptive to our requests. The tour lived up to all expectations.
Dee Pitcher

I do not have any restrictions in regard to my guiding, I can offer a full range of experiences