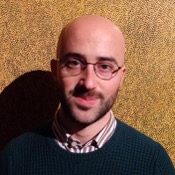 Victor Hugo wrote: "To study in Paris, is to be born in Paris" (Les Misérables).

Well, I am one of those new Parisians described by Hugo.
I often say that I was born twice, once in 1985 in Sicily (Italy) and then in 2010 when I came to Paris, having been awarded a scholarship to attend a prestigious university, the Ecole des Hautes études en Sciences Sociales (EHESS, Paris). After two years of study, I obtained a master's degree with honours in ancient history and archeology, defending a thesis on the relationship between Greeks and indigenous populations in Sicily.

One day, tired of being stuck in a library, I decided to do what I think I do best: to communicate and share my passion for art. In the beginning, it wasn't easy to change, but, once again, fortune smiled on me, I was employed by the Louvre as a museum attendant. Yes! I passed years telling people where Mona Lisa is… but I have also lived magic moments, especially that day when I helped the curators to transport some boxes from the reserves, or that night spent in the galleries transformed in a movie stage.

In the end, It was but a short step, from guarding the rooms to guiding in the rooms of the Louvre and the Chateau de Versailles as an official lecturer.

I am always the same friendly and enthusiastic person, though. The same "new Parisian" astonished by the beauty of the light, the grandiosity of the boulevards and the charm of a French bakery.

Come along with me and let yourself be inspired by the atmospheres of the city of lights.

Nicolas was terrific! What ever you highest score if he deserves it.
Alan Hirsch