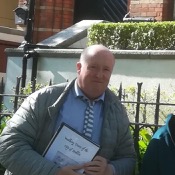 Welcome to Dublin - Tá Fáilte Romhat. I'm John - an experienced tour guide who has lived his whole life here, and I look forward to showing you the elegance, history and charm of Ireland's intriguing capital city.

I have given to date over four hundred walking tours of Dublin to visitors from all parts of the world, and have an honours degree in languages (German and Russian) from Trinity College. Some of my extended family are however still native Irish speakers in the West of this country, so I am of course Irish to the core.

Despite its location on the periphery of Europe, Dublin as a city boasts a remarkably diverse set of influences. The Celts arrived here a long time ago, followed by Vikings, Normans and English. Jewish people found a safe haven here from the pogroms of the Russian Empire; Huguenot Protestants came from France and Italians from the Lazio area settled here too.

As we wend our way through the streets of Dublin I'll tell you about the city known to the Ancient Greeks as 'Eblana', which later became the bustling centre of 18th century Georgian grandeur and was ultimately the stage upon which the 'terrible beauty' of Irish independence was born in the 1916 Rising. Hear about the town that gave the world Swift, Beckett, Joyce and Behan - a place with a literary heritage second to none . .

Dublin is also the home of modern writers such as Anne Enright and Roddy Doyle; and the city's rock exports such as U2, the Script, Hozier and Imelda May have become household names worldwide . .

I look forward to unlocking for you some of the secrets, sights and stories of this fascinating city; and to sharing with you its humour and its history . .

John was great! Very engaging and he thoroughly answered all of my questions. It was interesting to hear about a side of Irish history I was less familiar with, and John's passion/ knowledge for the subject is evident. We all definitely learned a lot. Highly recommend!
Jillian Brenner-Gibson

I have a Two-Subject (Hons.) Moderatorship in Modern Languages (Russian and German) from Trinity College Dublin

I am not a driver. I can accompany you in your vehicle or I can arrange for a separate air-conditioned vehicle and driver. Please ensure to advise the full group number at time of booking. Guiding at a few locations, such as Trinity College, is restricted.