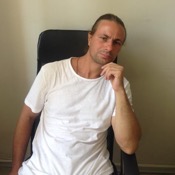 I guide the tourists by Odessa streets more than 10 years.

I started working as tour guide for big cruise companies and go on guiding city tours and making the guests to fall in love with Odessa. I know how to deal with the tourists from different countries and cultures. I never fail to find something in history of Odessa or everyday life of the city which will be interesting and familiar to every tourist. I tell the Turks about the Turkish period of the history of Odessa, acknowledge Greeks with the great heritage left by their ancestors, visit Jewish district Moldavanka with Jews, tell Americans what Mark Twain did in Odessa and why he called Odessa the most American city in Europe. Sure I try to make the city tour more entertaining, telling the funny stories about local inhabitants and jokes understandable to the people of all nationalities. I am always very cautious about religious traditions and folkways of my guests. As you can understand I have amassed huge experience in touristic sphere. Also I am fluent in four foreign languages English, Greek, Polish and Spanish.

The most tour guides in Odessa are graduates from the Foreign Language department. I majored in History, therefore, I know much more about the history of Odessa and Ukraine and my city tours could be much more diverse and picturesque than many of other tour guides. I am very flexible and always draw the tour up according to the wishes of the guests. I can present to the guests some standard touristic routes as Highlight of Odessa (Opera house and Potemkin steps), Jewish Odessa (Jewish district Moldavanka and Zionist leaders addresses), Catacombs, Odessa Temples (Lutheran Church and Synagogues, Mosque and Catholic cathedral church, orthodox monasteries and protestant churches), Greek Diaspora in Odessa (Museum of Filiki Etaireia and Greek Church), Poles in Odessa (Polish church and addresses of outstanding Polish writers Mickiewicz, Sienkiewicz etc), Kingpins of Odessa's Underworld (black market and jail), Odessa Museums and Palaces (Art Gallery and Palace of Tolstoy). Sure I can draw up the special route according to the wishes of every tourist