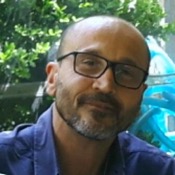 | was born in Naples, Italy, back in 1962 on the most famous day of the year in my country, the 15th of August, "Ferragosto" as people here call it.

My surname, Esposito, is very common in my city, a surname traditionally emblematic. Whenever you will meet an Esposito, you can be certain you will be dealing with someone of Neapolitan lineage. My first name is Giovanni, an old fashioned name, very popular for my generation, but | was nicknamed Gianni by family and friends. | always loved music, played guitar, actually. . . strummedì, | must confess and I have always been
fascinated by blues, country, rock and pop, American or English, but also Italian "cantautori" music.

| was just over my teens when, together with a dear friend of mine Salvatore, decided to venture on work experience abroad. In those days, the early eighties, it was London the place to be. Cool and cosmopolitan, London was a melting pot where everything was happening in music, art, culture and fashion, a magnet for youngsters from all over Europe and the whole world. So my friend and Il got on a train, and after having crossed half of Europe, reached London where we spent, unfortunately, only a few months, a lot less then we had hoped. It was an intense and exciting time cut short by a sudden illness that struck my friend, forcing him and me, | couldn't see him go on his own, to return back home. Sadly he then found out he had a rare
disease. Those few months | spent in England boost my English and the atmosphere | had savored there cast a spell on me.

Once back in Naples | did several jobs. I even worked for a while as a bartender in a popular bar on the city's promenade meeting and enjoying the contact with all kinds of people, tourists and not.
Sometime later my dad started having some health problems and I had to replace him on his taxi. The contact with people, especially those from foreign countries, became something | really enjoyed. Different culture
and lifestyles intrigued me and stimulated my mind. In 1989 | moved to England, married an English girl and had a child. The birth of my son, Josh brought the sunshine in my life and many years of happiness.
Before | actually came back to Italy, after a sad divorce, |took a long trip to China where I stayed for a month. Visiting the Far East had also been one of my dreams since my childhood. Wonderful experience the orient, Magnificent and unforgettable. Travelling has also been a passion of my life and in all those years | spent in England | took trips to visit many countries like France, Ireland, Scotland, Germany, Turkey, the Czech Republic and many former Yugoslavian states. Once back in my home town at the grand age of45, | had to start my life from scratch and having been away for so long | felt a foreigner in my own country.
Nevertheless | exploited my decent English and found a job as a professional escort driver for tourists. Today | love my job that gives me the opportunity to show and tell the marvels of my homeland, of which | am proud and meet many people of all kind from all over the world.
| studied in Italy and eventually got a college degree in Electronic
technology. While | lived in England instead | wanted to improve my English and enrolled at the University of Cambridge achieving an ESOL Skills for life unit certificate level 2, in English for speakers of other languages. |
also enrolled at the English Speaking Board achieving yet another Certificate in Esol Skills for life at level two.
I also got several other educational certificates like Security in Italy and National Vocational Qualifications by City
and Guilds of London Institute in retailing.

Outstanding best tour ever had. You are the best. Thanks. Alan Lerner
Alan Lerner

I am not a licensed guide and will not be able to guide you inside of the archeological sight.