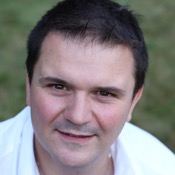 Hi! I'm Dewi, and I've worked as a tour guide for the last five years.

Since starting work as a tour guide in 2013 I have built up an impressive reputation for excellence and fantastic customer service with several tours guiding companies. In the autumn of 2018, after working for other companies for 5 years and moving from a part time guide to Head Guide, I decided to begin offering my own unique tours through ToursByLocals.

My interest as a guide includes film and TV tourism which comes from the fact that I originally trained as an Actor at the Royal Central School of Speech and Drama and have worked on numerous film and TV productions with companies including the BBC. In fact, I am the only tour guide in the universe who can say they have stepped through the doors of the Tardis, as I was involved in the filming of a BBC Doctor Who ident in 2016. I am also a massive history geek, who loves the history of the early to the mid-20th century, especially the espionage of the Second World War, and I love sharing my passion for history with other people.

All my tours are based on things that I love: film and TV, and my passion as a performer, director and teacher of Shakespeare, and History. I can lead tours on everything from James Bond, Doctor Who and Downton Abbey to tours on the life of Sir Winston Churchill, William Shakespeare and the real world of London's secretive Spies. While being based in London, I am also able to conduct tours to South Wales (where the hit TV series Doctor Who, Torchwood, and Sherlock were filmed and where His Dark Materials was filmed in 2018) and can take customers from London to Wales if they wish to explore the beautiful Welsh countryside. I can also accompany clients to the filming locations of the Harry Potter and Fantastic Beasts films (London, Oxford and Lacock) as well as the filming locations for the hit TV series and upcoming film of Downton Abbey.

Given my range of film and TV knowledge, I am also able to create custom tours for clients who are interested in two or more film or TV shows but have only a short amount of time to explore the UK's vast film and TV sites.

Everything went great! He toured an older teenage crowd and they all gave him an A plus. They said he was funny, thorough and knew all about the tour plus lots of other highlights. I would definitely use him again for our next visit.
Danielle Bollettieri

I do not have any restrictions in regard to my guiding, I can offer a full range of experiences