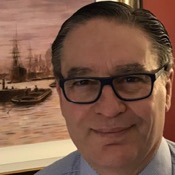 Live it! Love it! London it! I Love this city! Born in the East End, I have lived, policed and driven the streets of London for over 50 years.

Born in the East End, I have lived, policed and driven the streets of London for over 50 years. I now enjoy showing people its iconic sights, its secrets and its hidden gems!

I worked as a police officer in London for 30 years achieving the rank of inspector, on retiring I completed the 'Knowledge of London', (the world's most difficult taxi exam) to become a 'London Cabbie'. I then continued in my studies, taking the 'Worshipful Company of Taxi Drivers' accredited Taxi Tour Guide Exam, and am now also a qualified Westminster Tour Guide.

Samuel Johnson, the author of the first English Dictionary in the 1750's' said: "If a man is tired of London, he is tired of Life!" I can honestly say I am not yet tired!

In London's iconic Black Taxi, I will show you 'My' London. It's a tale of two cities, starting with 'Londinium' the City of London built by the Romans nearly 2000yrs ago and the City of Westminster, at nearly 1000yrs of age, a mere youngster, started by Edward the Confessor when he 'Moved to the Country!'

Now in the 21st century, those two cities have merged to become the sprawling metropolis that is London, yet have still retained their own identity. Let me take you through those streets I have grown up with, policed night and day, and driven in my Taxi.

There is so much more to see in this City, 'My City' the place I grew up, worked and enjoyed life. Have a look at my tours, contact me, let me put together a Tour or Trip that meets your requirements.

I also conduct tours outside of London.

Shore excursions from Dover Cruise Terminal, either to London and back, or a local tour of Canterbury Cathedral and Dover Castle through the beautiful Kent Countryside.

Oxford, Bath, Stonehenge or the Cotswolds.

Or even a Layover tour between flights.

I can prebook tickets for any buildings or eateries so you can avoid the queue or ensure a table at your preferred restaurant.

If you are a larger group I can arrange through my experienced contacts 6 to 16 seater transport to accommodate your party.

Peruse through my tours, contact me through the ToursByLocals message system, where we can chat and I can put together a personalised tour of your design.

Why go to the airport in silence while moving through London? Call Mark instead. I did and was rewarded with a mini tour of London while going to the airport. Plus, Mark has a computer-like knowledge of all the London shortcuts so that we could save valuable transport time even when traffic was at a standstill.
Jesse Roman

Qualified for the Knowledge of London Taxi Driver exam in 2013
Qualified as Taxi Driver Tour Guide in 2016 (accredited by the City University)
Member of 'London Historians'
Current student for City of Westminster tour guide qualification supported by the University of Westminster.
Born within the sound of Bow Bells, so a qualified Cockney Londoner!

Due to Government Regulations I am not allowed to guide you inside Historical monuments which require a Blue Badge Guide, such as Westminster Abbey and St Paul's Cathedral.