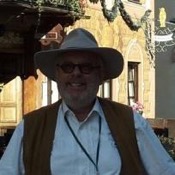 Facts, figures and fun! Welcome to Germany. This is my theater and I am your host, Arthur.

Before you sit down, get comfy, and enjoy the show, I would like to tell you a bit about myself, so you can get to know me a little. Then I will tell you all about the attractions I have put together for your pleasure.

As a child, I went to first grade in Wurzburg at a time when the world-famous residence was still a bomb crater. Tragic remains of the air raids over Germany from the mid nineteen-forties still scattered around as reminders of the war. In 1956, eleven years after the end of WW II, Germany was still reduced to a nation of rubble. I remember those days with the dreams of a six-year-old.

My mom walked me to school, holding my hand, speaking to me softly and sharing with me the wishes on her lips and great hopes for me. She said, "Never give up on the idea to become a well-educated man one day. Study a lot. Search for better worlds on other continents. Go to foreign lands. Meet people of different walks of life with open minds, unbroken hearts and intact homes. Look for progressive communities in advanced places where faith and freedom govern, and everyone is equal, protected under the common standards of human decency. Become a people person, my son. "

Mom always encouraged me. At this tender age I understood very little of what my mom said but I certainly felt the intentions and the sincerity in her voice. The seriousness with which she repeated her words underlined the worries of a mother jittering for the future of her child.

I can say today that I did what my mother wanted me to do. I became a Swiss-educated Hotel Professional. I studied Reformation history. Stuck my nose into several colleges around the world, learning at least four of the main languages spoken. I took several semesters at law, economy and sales professional faculties. During that time, I worked as a tour manager, for several international companies . This was a very special time in my life and it shaped me in ways that I am still learning about. I lived for thirty-eight years outside of Germany. The continents I know best are North and South America, but I have also lived in the islands and in the Mediterranean. From these experiences I have learned my experience as a German but been influenced by foreign customs and cultures, to become eclectic and idiosyncratic enough to dive right into other cultures and habits of folks like you, who I am going to take care of while you are here in Germany.

When we travel together, I will show you where Beethoven was born, where Mozart's grandfather died destitute in a poor house, where Goethe seduced more than two dozen women telling them how much he was madly in love with them, where Martin Luther said brash and funny things, hardly to be repeated on paper and where Mark Twain made it to the peak of the Alps on the back of a donkey, eager to watch the most spectacular sunrise and missed it both times, due to a heavy night of drinking before. A fierce hangover couldn't get him out of bed.

I will bring you to places where fifteen hundred types of sausages are being made, and where an army of bakers know how to produce fifteen hundred different kinds of bread. Come along with me to a wine cellar and taste the best white wine in this world. One hundred thirty-seven countries buy three hundred forty-two million gallons of German white wine every year. It must be good; don't you think so?

To every place we go, there is a story, and believe me, I have that story! In addition to leading tours I am also a successful writer. I have had five books published translated from German into English and Portuguese. I have traveled with many People, even with Presidents, World War II pilots, Archbishops. In fact, one American Archbishop refers to my services in one of my books, as a "great experience. "

Please come and see for yourself this beautiful country, rich with history in ways that you could not expect!

Danke Schon! I had a 5 hour layover at Frankfurt airport. Arthur made arrangements to meet my right on time when my flight arrived. Loved how organized he was in the arrangement since Frankfurt airport is busy. I had the chance to see everything in Frankfurt in such a short time. Enjoyed hearing about the history of the city and the future progress. I can talk to him for HOURS!! Wish I had more time. I highly recommend him and this transit tour! Don't just wait at the airport.
Andrew Chung