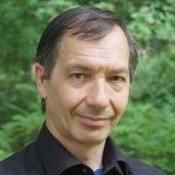 "Ich bin ein Berliner" since 1992. But I know the city since the early 80s, cause a relevant of mine had established his own Restaurants in the western City since the late 70s.

Berlin in those days, on both sides of the wall, it was a total different city.
I started 2004 to work as a trained tour guide for the Berlin/Brandenburg region. As a member of the "Berlin Guide" association, now I'm one of the first DIN-EN Graduated Tour Guides in Germany and Europe. Its the -state of the art- qualification rate.
Meanwhile I've earned several licenses to guide through the castles and historic gardens in Berlin and Potsdam. (www. spsg. de) Myself occurs for this association sometimes well dressed as a historic person, to perform within a booked tour.
Although I' m related to the main barrier free Tour Agency in here. Hiring a special Wheelchair Bus or another van for a Trip No problem.

Amazing tour of Potsdam . Gerhard was an amazing guide with great knowledge and passion for German history. We had 3 kids with us and he was very kind and took time to attend to their needs. We had a inside tour of Nueue Palais and saw all the other palaces and gardens from outside , despite being a very hot day everything went very smoothly and I will strongly recommend him for anyone that is interested in private tours while in Berlin .
Imran Ahmed

I am a professional Tour Guide for Berlin and Potsdam/Brandenburg Region since 2004. And I'm now one of the first EURO DIN-EN Graduated Tour Guides in Germany and Europe.This includes various advanced skills.
Although I've got many guiding-licenses for the castles and gardens of the Prussian Castles and Garden Foundation, like Sans Souci in Potsdam.

In Germany its not allowed to drive a car and give sightseeing-informations by the same person.This services must be done by two different personas.