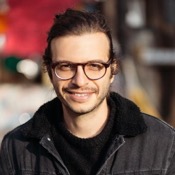 Hello! Let me start saying what Berlin is for me: a physical space and a scenario of challenging stories.

Berlin has been also my object of study. For my M. A. and PhD studies, I researched Berlin related events and figures - from the rise of nationalism in the 19th century to the culmination of Nazi racism in the 20th; from the arrival of the first Jewish families in 17th century to the massive assimilation of thousands of Jews into German culture in late modernity; from Heinrich Heine to Hannah Arendt; and from Karl Marx to Karl-Marx-Alle (Avenue).

Berlin is also my hometown. I've lived in Neukölln, Friedrichshain, Prenzlauer Berg, Mitte, and its parks and corners and memorials are a constant source of meaning, a trigger of imagination. That is why, instead of throwing random and raw facts, I invite my guests to explore and think about the many contexts and the many layers of this city, in which world history and local life interlace spontaneously.

Being born in Brazil, after living in Spain and the US, I've chosen Berlin for some of these reasons. Here, I can combine my academic formation - PhD (Philosophy), M. A. (Political Philosophy and Creative Writing), B. A. (Social Communications) - with my passion for the least German of German cities.
I invite you to think of and experience Berlin with me.

Rafael gave us a wonderful tour. He is very knowledgeable, organized and thoughtful, and answered all our questions. We saw and learned so much! Thank you for such a memorable day!
Amy R.

I am not a driver, but I can arrange for a separate car and driver if the traveller wants it.